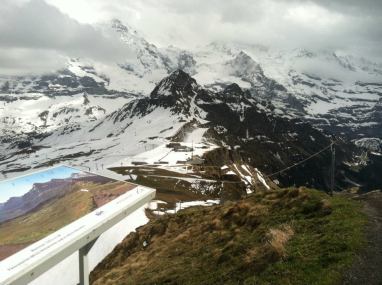 It’s almost dream-like, the wandering nomad living out of the pack on their back, sleeping on trains and bunks, taking note of every scent, examining every crack in the sidewalk, and discovering cultures, peoples, and new ways of living. That might be a bit overboard, but, perhaps these are the reasons that so many American’s define the “backpacking Europe” adventure as a rite of passage.In 2012, smack-dab in the middle of my undergraduate studies, my then boyfriend (little did I know that halfway through the trip he would become my fiance) and I set out to see the world, well three new countries of the world anyway. He had never left the country before, and I was scrambling to catch up on my German as we set out for Germany, Switzerland, and France.Here are some random tips of the trade that we learned along the way. (I will expand on some of these in subsequent posts along the way)1) Don’t be wary of hostels! Don’t listen to your uncle who knew somebody who knew a guy that…No, they really are great, and their cheap price tag is not their only redeeming quality. You will be forced to live in close proximity with strangers. I know that sounds intimidating, but it really isn’t all that bad. You will meet new people, who most likely explored a different part of the city than you did today and they will give you some tips on what to see in this big, scary city that you just stepped foot in. Which leads me to my second tip.2) Befriend strangers. I am not telling you to completely go against everything your momma taught you (stranger danger) but be open. For us, the hostels we stayed at and random moments waiting on trains were our gateway to new connections. We threw down some beers with Canadians, cooked dinner with a French guy, spent hours talking to a Chinese man in a Berlin train station, and spent a day hiking through the Alps with an awesome couple from California. You don’t know who you’re going to meet and what experiences these might lead to.3) Whether you’re a girl or a guy, dry shampoo and shoe deodorant will become your best friends. If you’re backpacking and trying to catch in as many sights as you can, chances are you might spend a night or two on a train. Just because you don’t have access to a shower doesn’t mean your hygiene has to suffer. You will also be in close proximity with other people. After a long day of trekking through who knows what, chances are your shoes might stink–do yourself and everyone else a favor, invest in some shoe deodorant (they sell it in an aerosol can just like dry shampoo). These two items will be worth the extra weight in your pack, trust me.4) Learn a few phrases of the native tongue. This is one you might have heard before, but I cannot stress it enough. Walking up to someone in their country and at least making an attempt to speak their language really HELPS. It will make or break your trip. Do you know how many people are sick of (us Americans) who just walk up to them and start speaking our language, expecting them to understand us? Well, a lot, they don’t care if you are completely butchering their language, because chances are they will know a bit of English and will switch over for you. They will appreciate your attempt and treat you with respect as long as you are respecting them.5) Avoid souvenir shops, opt for a thrift store.  I am not trying to pull a Macklemore here, but if you want a few small trinkets to take back home, don’t throw down 100+ bucks at a souvenir shop for a German beer stein when you could get the real thing for a couple of Euros. You will find some really awesome things in foreign thrift stores that your measly traveling budget can actually afford. Take the time to research a couple in your area and browse. It is a neat experience on its own.